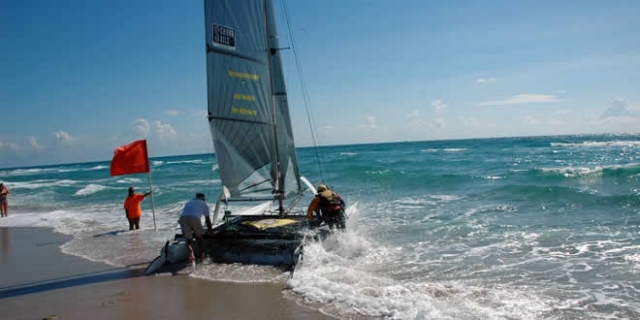 It's been quite a journey working my way up the South Florida coast from Islamorada to now waking up at Vero Beach, shop Florida. The first two days were picture postcard "chamber of commerce" days and day 3 was much the same except for the small detail of much more wind and a storm cell that crossed the race path. The winds were mostly steady 17 to 20 but some isolated thunderstorms caused much higher winds and challenging conditions along the leg.

The Flying Phantom is out of the race after having an unsuccessful beach landing at the Vero Beach finish. John Tomko, skipper of Lupe Tortilla and many times winner of the Great Texas 300 and other endurance races, successfully rounded up into the heavy surf and was just moments away from landing safely as all the ground crews rushed to grab the boat. Unfortunately they were in just a bit too deep water for the help to get hold of the boat so they had to stay in the surf backing in "one wave too many" and that wave flipped the boat over in the surf snapping the mast. All the ground help wrestled the turtled Flying Phantom onto the beach, it's high tech foils and t-rudders sticking up in the air.

It took some hard work in the surf to get enough of the mast, sails, and rigging cut away from the boat so it could be dragged/carried out of the water. I've got a bunch of pictures in the Florida 300 photo albums showing the sequence. It's a shame photos can't show the height and steepness of the surf very well. We had been standing on the beach all day watching it build. Every third or fourth set of waves piled up into a steep 6-8 foot wall/roller and that's the kind that got them.

Pictures from the crash and the aftermath and all the other landings and events of the day are in the "Day 3" album in TheBeachcats.com photo albums.

The other drama of the day that was happening at the same time was that team Cat In The Hat with Larry Ferber and Jackson Smith de masted about 7 miles short of the finish when they broke a shroud. Luckily for them they weren't injured in the resulting mess and were able to make it to shore. Jackson was able to text the ground crew that they were alright and drifting towards shore, and the Kattack locator gave their position. Ground crew and volunteer helpers were able to locate them and retrieve the boat and the Key Sailing team provided parts and assistance repairing the boat. I wouldn't be surprised to see Cat In The Hat back on the line this morning.

Other than the problems found by Cat In The Hat and Lupe Tortilla all the other teams arrived safe and unbroken performing excellent surf landings. The most impressive sailing feet I witnessed was the incredible surf landing of team Rocket on their 20 foot foiling beachcat Nacra 20 FCS. With the large foils under the boat that cannot be pulled completely out like the non-foilers the boat needed to make a 180 degree turn into the surf right at the shoreline. Turning two far out by even a short distance would leave them exposed to the tall breaking waves and waiting too long would put them onto the beach. The skipper John Casey was able to execute a perfect turn as close to the shore as it was possible to float the boat, putting them in reach of the multiple ground crew that got the beach wheels under and pulled the boat up to safety with no damage.

Key Sailing leads the race after three legs with a 37 minute corrected time margin over the open class but only a 5 minute margin for overall victory lending some extra drama to the final leg from Vero Beach to Cocoa Beach. Be sure to watch live and track the race, links are at the end of this report.

There were many stories of pitch-poles and and very difficult conditions all along the course. Tom Whitehurst, crew for the leading team Key Sailing had a trap wire break and almost got separated from the boat but was able to hold on and get back on board with help from Kirk Newkirk. Before their bad luck at the finish team Lupe Tortilla told me that had pitchpoled the Flying Phantom at speed while on foils sending it flipping forward so hard that the mast hit the water ahead of the boat. It's a testament to the toughness of both the crew and the boat that they were able to continue to the finish after that.

Today the Florida 300 teams are joined by additional competitors racing the one-leg from Vero Beach to Cocoa Beach for the Dogfight. There are a mix of Hobie 16's and G-Cats with the notable entry of Hans Geissler, creator/builder of the G-Cats sailing the leg on his personal G-Cat 5.0 with squaretop.

Report by Damon Linkous of TheBeachcats.com


Live video/audio feed from the starts and finishes.
http://florida300.com/live